Local artist, Tom Mullany hosted a viewing and send-off party for a recently completed mural for The Winery at Bull Run, slated to open in June. This is the second major mural that Mullany’s completed this year at Bruce Vierling’s warehouse in Flint Hill, which has great accommodations for projects of this size.

The mural (6 feet by 20 feet, oil on canvas) portrays the morning of the First Battle of Bull Run, as picnickers are arriving from the city and some fighting has just begun on distant hills and fields. The majority of the scene depicts beautiful farmland as it might have looked before the war ravaged it.

The painting was dry enough this week to remove from its stretcher and carefully rolled onto a large cylinder to be shipped to the winery, near the center of Manassas Battlefield Park, where it will be permanently affixed to the main wall of the tasting room. 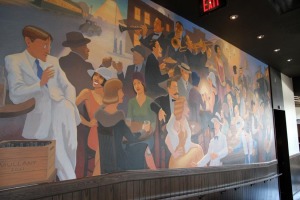 William Jeffrey’s Tavern opened six days ago at 2301 Columbia Pike, in a neighborhood that could frankly use a new hangout (soon it will get another one, an outpost of Eamonn’s scheduled to open in early 2012). Chris Lefbom, who owns the restaurant with partners Wilson Whitney and Adam Lubar (they also own Dogwood Tavern, Rhodeside, and Ragtime) says the crowd’s been mostly twenty- and thirtysomethings, though he expects young families to follow.

Here’s what they’ll find there: 191 seats spanning several distinct areas—“nooks,” Lefbom calls them—all outfitted with televisions, of which there are 18 in total, plus two glass-encased fireplaces that separate the main dining area and bar from a back room that’s available for private parties. Essentially a from-scratch project, the interior was designed by architects at CORE with lots of input from the owners. Murals by local artist Tom Mullany imagine a 1920s Rosslyn, once the site of brothels and speakeasies and other institutions of ill repute. Spread out throughout the restaurant, the artworks feature reoccurring characters: a jazz band, a mysterious white-suited fellow. The tavern was named by combining the first names of Lefbom’s father and the father of one of his partners, both recently deceased. William and Jeffrey appear amidst the fictional characters in Mullany’s largest mural, just behind the bar. One Dad is smoking a cigar in the painting, the other is pouring beer.
This is the first time the restaurant group has worked with a chef; they hired Sam Adkins, a vet of Cashion’s and Jackie’s Restaurant in Silver Spring, to design the menu. Adkins tested dishes like the bistro herbed chicken and the pork carnitas wrap by first running them as specials at the group’s other restaurants.

Mixologist Logan Skidmore consulted on the restaurant’s list of nine cocktails, which includes a French 76 (like a French 75, except with vodka—in this case, rosemary vodka—instead of gin), and an Old Fashioned with chocolate bitters. Most of the 22 wines on the list are available by the glass; beers on draft include local offerings like Loose Cannon Hop3 IPA, made in Baltimore, as well as more far-flung options such as the West Coast (read: hoppy) IPA from Green Flash in San Diego.

William Jeffrey’s is currently open for lunch and dinner, with plans to expand to weekend brunch later this winter. A limited late-night menu is offered from 10 PM to close Sunday through Wednesday, and 11 PM to close Thursday through Saturday. A daily happy hour from 3 to 7 PM features drink discounts: $2.50 Miller Lights, $3 micros, and $5 house red and white wines.